Award for 11 Years of Learningful Experience

“My love of adventures allows me to see into the lives of indigenous peoples (IPs) with all their intricacies and complexities. Globalization and modernization have pushed societies in Asia and around the world to live in a more homogeneous way, in spite of the rich diversity of our cultures and geographical identities. Globalization has not always benefited people at the local level.”

It was a quotation from Butet Manurung’s speech in the 2014 Ramon Magsaysay Award (RMA) Presentation Ceremony, 31st August 2014 in Cultural Center of the Philippines. Then, Butet delivered an example of how globalization and modernization has been detrimental for the Orang Rimba – an indigenous group that has become SOKOLA’s beneficiaries for this eleven years – and how literacy help them to sustain their lives.

Having this award in the 11th years of SOKOLA makes us pause for a moment to recall the journey we’ve been through: any sweat that drips in wet forest soil, leech on our feet on the way to the jungle, river water we drink,malaria disease that always await us, smile of children in the jungle, and of course every sentence that they managed to read and write. We believe that this award, which is often considered to be Asian’s Nobel Prize, was given because of all those learningful experience we had. The award given to Butet is an honor for SOKOLA as well.

I remember in 2003 when we confidently founded the organization with nothing but our desire to stay with the Orang Rimba so we could assist them to face the changes, and the most meaningful to us is trust from the community. Not many people believed in our dream. TdH Germany was one of the few who trust us although we did not have real office, a complete legal documents, or even ability to write a proposal.

To save our money, we stayed in the jungle as long as we could. The community feed us with animals they hunted, and the pupils looked after us very well. By being in the middle of the community, we engaged in their daily life, felt the uneasiness of their life, and saw problems from their point of view. We witnessed community’s struggle in dealing with the ever-encroaching modern world.All these experiences, not to mention adventures, have formed our thought on how an educational program could help community to face problems. Therefore, after eleven years, our closeness to the community is one thing we sustain.

We have been learning many things from the community in the jungle. We formulate SOKOLA’s vision, mission, and our learning method as well from our experience in the jungle. It is the method that we then bring to other jungles across Indonesia, with different tribes and problems. And the award shows that we are on the right path.

Now, after the celebration, we are back to the field and continue our work. The adventure is not finished yet. Our country still have about 8,5 million illiterate people, some of them are indigenous peoples groups who cannot access formal school due to geographical and cultural reasons. Meanwhile in our Jungle School, we are in the process of regenerating cadres of Orang Rimba who are able to negotiate with the outside world and defend their rights. As Butet said in her speech, we hope the time when Indigenous Peoples can represent themselves and determine their own fate. The Orang Rimba is on their way!* 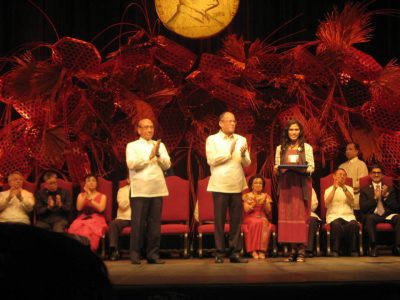